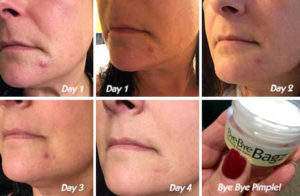 So at almost 55 I am going through this hormonal rollercoaster and I still occasionally get a pimple or two. This particular one hurt like crazy, because it was one of those “under grounders”.  I whipped out the Bye Bye Bagz™ as I have for a long while now, and I decided to document how quickly it soothes and calms the area. Within 4 days it was almost healed.

I talk about this little gem all the time, because it is so much more than just an eye cream. It is a skin calming, anti-inflammatory cream too. That is the reason it is so good at soothing the delicate skin under the eyes. About a year ago I had read an article in Bottom Line Personal that mentioned how Dermatologists use steroid injections to calm the hurt and inflammation of an underground pimple. So I thought that maybe, just maybe, because Bye Bye Bagz™ was an anti-inflammatory cream too, it might do the trick. I was right! It did. I was so pleased. It calmed the skin and helped shrink the whole pimple. All the while it was moisturizing, not drying the skin around it. This helps prevent other pimples from starting in the first place.

No, it doesn’t happen overnight, although truthfully, the little baby annoying white heads (and even some black heads) clear up in only 1-2 days. But this one was big, and hurtful and one of those that you wonder how the heck still happen at my age. But they do. My doctor literally said, “welcome to the age of menopause”. I was not amused. As a kid, I rarely had pimples, but as an adult, I got them more. Oh well, another joy of aging!

So anytime I ever get a pimple, instead of the “blemish cream” I whip out my eye cream, because it’s that and so much more!