Slowly, she stroked his face. “Sorry for the stubble”, he said. 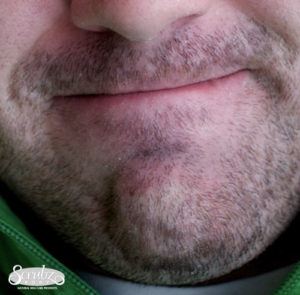 The sound of his voicemail made her weak in the knees. He was running late and would meet her at the restaurant. They were dating for 2 years already and still, just the thought of him brought her to another place. Tonight was date night. They were meeting early at the local Italian place so they could take a long walk after dinner. It had been a favorite of theirs for years, was nondescript and noisy, yet the smells and the taste of Mama Lou’s marinara were 5 star and kept you coming back.  She got there and secured a table by the window so she could watch him walk up. 5 minutes later he was there. Her heart skipped a beat as he walked toward her. Without thinking, she wrapped her arms around him and pulled him close. She couldn’t wait to get his lips on hers. Her mouth found his and as she started to kiss him him fervently his beard scratched her face. OUCH, instead of OOOOH was the first thing she said.

Slowly she stroked his face as she pulled back to look at him. “Sorry for the stubble”, he said. He was in a rush as he left for the office that morning and it was too much of a hassle to shave. He was prone to irritations and razor burn, so it was a whole process for him with his lotions and potions, but he usually did it on date night. Hmmmm she knew she must find a way to never let that happen again.

She remembered a store she had passed earlier that day with a razor in the display. She vowed to go back in the morning.

After dinner they strolled around town enjoying the cool Autumn air. It was only 6:30 pm and yet it was a dark as midnight already, now that the clocks had changed. The lights were still on at the shop she had passed earlier. She asked to go in, figuring it was kismet she did not have to wait till tomorrow to find out what they had that might include a razor.

After their long stroll they headed back to his place. Slowly they entered the bedroom. And headed right for the sink in the bathroom. With a giggle, they took the shrink wrap off the jar and dampened his skin.

He would never be stubbly again.