I started juicing on a dare. It changed my life and it can change yours! 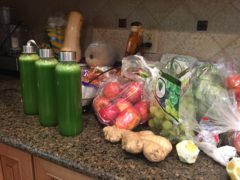 You want me to drink juice instead of eating my food?

When anyone brought juicing up, I had standard answers and stuck to them for years. I loved to eat and use my teeth. It would not fill me up. It was too much work. And on and on. And then my brother mentioned the movie, Fat, Sick and Nearly Dead.  His daughter had watched it and told him about it. He had just started juicing. himself. I filed that thought on the back burner and continued to be on my solid food diet.

And then one day I read on Facebook that my friend Jennifer was going on a Glamping vacation with her friend. They were going to do a juice-only fast for a minimum of 21 days. (she actually made it to 60 days!) I followed her posts and decided I wanted to be in the 1st beta class that Jen had created. It was called the Glamper’s Guide to Juicing and was a testing ground for her now, Celtic Forest retreat. I started watching all the movies she suggested, like Fat, Sick and Nearly Dead, parts 1 and 2. Then I watched SuperJuice Me. I followed with May I be Frank and Hungry for Change. Finally, The Gerson Miracle brought it all home. It showed me in no uncertain terms how what we eat truly has a total and complete effect on how we feel and our chance to contract a disease.

Initially, losing weight was my sole purpose for trying. After menopause and a really stressful year, I had gained too much. I knew how to eat healthfully, but did not always make the best choices. I wanted to give my body a kick start. Who knew I would gain so much more in health as I was losing weight.

I eased into it. If not, according to everything I read, I would have had a detox issue. So first I substituted my breakfast with juice for a week. Then in week 2, I had a breakfast juice, lunch juice, and a veggie snack along with dinner. When I went to 3 juices a day and no food. It was actually pretty easy after the 2nd day. I had given up coffee too, so the little headache the first 2 days was not great, but after that, I felt fine! After 12 days, I felt so crazy good that I was actually nervous to start eating again. I slowly took the food back, doing so in a 3 day period, one meal at a time, but I never went back to 3 full meals.

After a year, I only eat one full meal a day, with the occasional 2nd meal. I still have juice for breakfast and lunch. My snack during the day is what I call “fregtables”. I take the pulp from my favorite carrot juice recipe (see below), mix it with all sorts of seasonings like garlic, salt, pepper, oregano, basil, paprika, and so on. I crush up a bunch of nuts and seeds and add that to the mix. Then I spread it on parchment paper and bake it at 300F for 1.5 hours and then 200F for 4 hours or until it is crispy-chewy.

I love the recipe for “Mean Green” from the movie, Fat, Sick, and Nearly Dead, which is 16 leaves of kale, 2 cucumbers, 8 stalks of celery, a lemon, 1 inch of ginger and 4 apples. I’ll change up the kale for spinach and the apples for pears or pineapple sometimes. It usually makes about 36 oz. of juice. Another favorite and super delicious is carrot, apple, ginger, butternut squash, and sweet potato. For this one, I rotate the amounts of carrot, squash, and potatoes, depending on what I am in the mood for. It’s always about 4 apples and 2 inches. of ginger. Another good one is so simple, 4 beets, 12 carrots, and 3 lemons.

I use a Breville juicer and recommend the 850 for ease of cleaning and speed of the machine. You will have to clean it during your juicing session if you juice more than a few bottles at a time. I do about a weeks worth in one shot!

It is amazing to me how I have changed. I was a pretty decent eater, giving up soda and processed foods years ago. But juicing literally changed my life. It gave me back super nutrition in a tasty package. It also affords me my morning re-boot. If I have a dinner that includes carbs or sugar or a sauce or whatever, it doesn’t ruin me for the week anymore like when I was dieting.

Now I know that my next meal will be a juice and it will re-start my whole day and attitude about food.

May 2020 update. It’s been 2 years now and I am still juicing twice a day. I am far from perfect in my regular eating, but I am always consistent with the healthful juice!