Ugh…Pimples. How they start. How they can disappear! 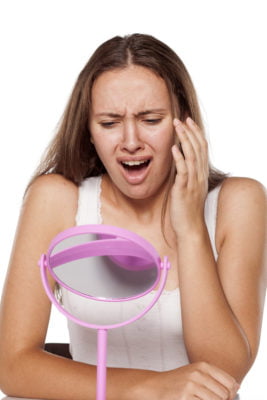 Who of us has not gone through the angst and the dread of waking up with a face full of zits. As a teen my brother had dry and flaky skin after using a traditional “pimple busting” wash and then a few hours later his skin was oily. Back and forth through the same routine. He never understood why it happened and attributed it to teen skin. I remember I used to lean my chin on my hands. I would get pimples and breakouts in that exact spot.

Here are the reasons it happened to both myself and my brother:

Basic acne and pimples are mainly caused by 3 things: dead skin, sebum oil and bacteria. When these 3 things get together, inflammation begins in the clogged pore and the pimple erupts. White heads have not opened yet, and blackheads have been exposed to the air.  When multiple follicles merge under the skin a cyst can form, which when inflamed, can hurt like crazy. Seriously, have you had an undergrounder? Even if you gently brush them, they hurt!

So here are a few solutions to those 3 issues:

Stop touching your face! Bacteria that is sitting on hands is transferred to the face when touched. If this bacteria gets in the pores and mixes with the dead skin/sebum oil plug, it becomes a pimple. Seriously, think of those creepy, crawly microscopic bacteria guys crawling all over your face. Not a pretty thought, right? So stop touching your face without having super clean hands, first!!
Exfoliate regularly! I recommend gentle, regular exfoliation for lots of reasons. Sometimes, I recommend it so much I sound like the father in the movie My Big Fat Greek Wedding when he talked about Windex® being a cure-all. But exfoliation for pimples, specifically, is amazing. The reason is that when dead skin is removed, approximately a third of new pimples don’t form. Why? Because dead skin flakes are what gets in the pores and starts the pimple in the first place. Depending on the method, it can be done every night (sugar/oil based) or once a week using something more harsh (like a mechanical spin brush).
Cleanse with botanical oils! Yes, oils. Contrary to popular belief, cleansing with oils does not make you more oily, it makes you less. When you use harsh cleansers, you strip the skin of its own oils, so it literally creates more. When you cleanse with oil, the skin is all like.. “ahhhhhh, you rock, ty” as it becomes balanced. Now, because your skin is happy and balanced, it has no need to make more of its own oil, so skin does not get oily anymore. Also, botanical oils help breakup existing sebum oil/dead skin clogs that have built up in the pores, so there is less chance it will become infected and become a pimple.
I don’t recommend either salicylic or benzoyl peroxide, because both are drying to the skin, which causes more flaking and potentially, more pimples. Instead, the area should be kept moist and clean with simple ingredient botanical oils.

Don’t Pick Pimples! (yes I am looking at you!)

Picking at acne should never be done by anyone other than a dermatologists, and even then, with extreme care. The single biggest reason, besides making things worse and red and inflamed, is that bacteria can spread from the pimple to other parts of your face and skin, and create other pimples. You can also scar your skin forever.

Put away the harsh pimple creams.

Instead of drying out pimples, which can ruin the skin around it, nourish the area. Try our Shea Butter based spot moisturizer/anti-inflammatory for pimples.

Acne that forms small cysts really do not need antibiotics or steroids, they just need something to calm down the inflammation. A simple anti-inflammatory cream, preferably one without drying ingredients like alcohol, can make it hurt a lot less and make the swelling of the area go down, too. Then the pimple will head and disappear. I actually had a horrible, underground cyst like pimple, and I used our Bye Bye Bagz. Here’s my story!
I believe before anything more invasive is done, or antibiotics taken, simple natural alternatives should be tried. Besides being so much less invasive, it sets things up for a future of better skin in general and has zero side effects.
What do you think?