My Love of Emu Oil Started on Martha’s Vineyard 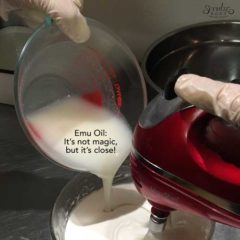 It was a beautiful Summer afternoon and we were enjoying the last full day on Martha’s Vineyard before we had to take the ferry home. My husband and I were shopping at an outdoor craft market, and the vendors were so varied. There were artisans and indie makers and food trucks and music. It was absolutely wonderful and welcoming. A perfect end to our vacation. After drinking a large bottle of water, I went to the ladies room, expecting to be in there as little time as possible. Who would have know that going to that craft fair would also change my business. The reason is that when when I sat down, there was a flyer taped to the door. Emu oil benefits was the headline.

I had never even heard of Emu Oil before!

It was an informational list of the many benefits and why it was so good for skin in particular. I was intrigued to say the least. I sat there and read the whole thing. Twice. I read how Emu oil is made up of about 70 percent essential fatty acids, which is what skin needs to regenerate, plus a cool combination of omega-9, 6 and 3s. These compounds give Emu oil its ability to reduce inflammation, help relieve muscle pain, moisturize the skin, and treat skin conditions. It also contains antioxidants and vitamins, such as vitamins E and A. This oil absorbs really easily due to the fact the fatty acids are so similar to those available in skin itself.

My head was spinning in a good way. My husband was calling to me. I was tempted to pull it down, but instead, left the stall, washed up, and headed for the vendors booth. I bought my first bottle on the spot and asked a dozen more questions. She only sold it in it’s pure form, not mixed into creams or balms, but she said her friends used it that way. My eyes lit up because that is exactly what I was intending to do!

I went home and started playing with the recipe.

I warmed and whipped and stirred and folded. I whipped some more. It was not until we literally used the expression, “it’s cream and dreamy,” that we knew we hit pay dirt. And that was just the recipe for Balmz™ As I studied more about the anti-inflammatory benefits, I realized that by upping the ratio of Emu Oil by 200%, the balm would become an incredible anti-inflammatory eye cream. I swear, every time I use it myself, or talk about, I get excited.

It works. Plain and simple.

So my trip to Martha’s Vineyard was not only super fun, but educational and business changing as well. You never know where you’ll learn something new!